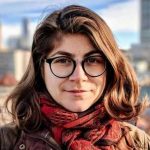 Is work (as we know it) on its way out? Some certainly think so, and they have not hesitated to envision the kinds of lives and societies that would be possible in a world that is founded not on formal wage labor but something like universal basic income. But here is the thing: ethnographers in different parts of the world have found that many of the people who would benefit the most from such a shift are still very much committed to employment—they want money, but they would prefer that it be a wage and not a cash transfer. In this episode, Kelly chats with Dr. Liz Fouksman about enduring attachments to formal wage labor and what she calls the “moral economy of work” in South Africa and Namibia.

Liz Fouksman is a Lecturer in Social Justice at the Centre for Public Policy Research in the School of Education, Communication, and Society at King’s College London. Her scholarship has appeared in various outlets, including Economy and Society, World Development, and Africa.